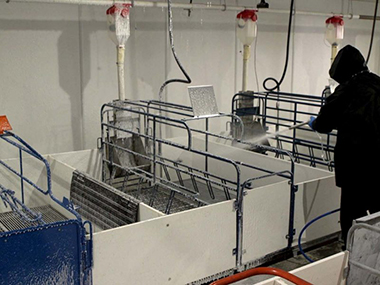 In May of 2013, porcine epidemic diarrhea virus (PEDV) was detected in swine for the first time in North America. It spread rapidly, in part due to contaminated livestock trailers. The objective of this study was to test the efficacy of an accelerated hydrogen peroxide disinfectant for inactivating PEDV in the presence of feces on metal surfaces, such as those found in livestock trailers.

Three-week-old barrows were inoculated intragastrically with 5 mL of PEDV-negative feces for the negative control, 5 mL of untreated PEDV-positive feces for the positive control, and 5 mL or 10 mL of PEDV-positive feces that was subjected to treatment with a 1:16 or 1:32 concentrations of Accelerated Hydrogen Peroxide® disinfectant for a contact time of 30 min at 20°C. These pigs served as a bioassay to determine the infectivity of virus following treatment. Rectal swabs collected from the inoculated pigs on days 3 and 7 post-inoculation were tested by using PEDV-specific real-time reverse transcription polymerase chain reaction and the proportion of pigs in each group that became infected with PEDV was assessed. None of the pigs used for the bioassay in the 4 treatment groups and the negative control group became infected with PEDV, which was significantly different from the positive control group (P < 0.05) in which all pigs were infected. The results suggest that the application of the Accelerated Hydrogen Peroxide® under these conditions was sufficient to inactivate the virus in feces found on metal surfaces.